3.4.6 ”visited tile” means that more than half of the robot is inside the tile when looking down from above.
defines what a visited tile is.

But no other rules use the term “visited”, only “reached” or “navigated”, for example:

3.5.2 A robot is considered to have successfully navigated a hazard (obstacle/intersection/dead end/speed bump/gap) when it has traversed the tile where it was placed without human intervention.

3.5.14 […] For these points to be rewarded, the robot must reach (have half the robot on the tile) the third tile after the evacuation zone.

It is not really consistent and redundant. So does a robot get the scoring for a obstacle/intersection/dead end/speed bump/gap when it has visited the next tile? And is a checkpoint considered reached/visited when the robot is more than half in the tile? “Reached” etc… should be replaced by “visited”.

however, if it is not enough I think we can modify this to mark wiht bold letters, because also we explained this with images ( the images are located at pages 17, 18).

I hope this help you.

I think it is great and necessary to define what visited means, but I am saying that I think it would be better if the rules also use the term “visited” instead of “navigate” or “reach”

Otherwise it is defined what “visited” means, but in no rule the term “visited” is referred.

3.5.2 A robot is considered to have successfully navigated a hazard (obstacle/intersection/dead end/speed bump/gap) when it has visited the next tile towards the direction of the evacuation zone without human intervention.

3.5.14 […] For these points to be rewarded, the robot must visit the third tile after the evacuation zone.

I think it is a little clearer then. Just a suggestion

I hope I could make it more clear now what I mean.

As you mention, we have realised the inconsistency of the terminology used in the scoring methods.

In fact, these sections have been updated for the new rules that will be uploaded (hopefully very soon…). Perhaps we can discuss this issue after updated version of the rules have been released.

And sorry for the delay of the release of the updated version. I do not have control over this unfortunately…

Hi, I am checking the 2023 rules and have a similar question on this topic. So, I will add my question here.

I am unclear about the point “robot has reached the next tile.”

What exactly is the robot position count as reached the next tile?

Welcome to the RoboCupJunior forum.

GOOD QUESTION!!!
We should add the explanation for “reach the tile” on the 2023 rule.

About “reach the tile”.
A robot go to next tile and trace the black line on the tile.I draw a figure. 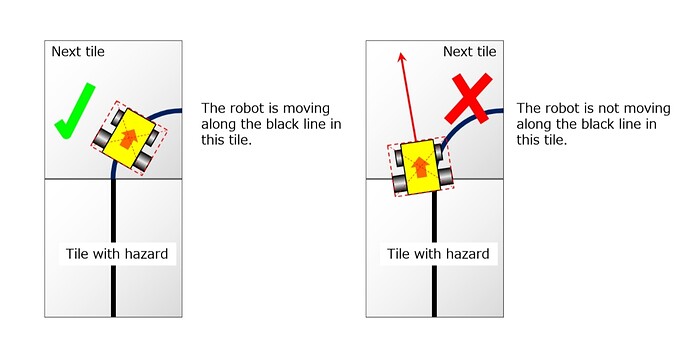