As we started to plan our next robot for the Soccer Open League, we came up with some inconsistencies with the rules about the kicker. On the one hand, the power of the kicker is restricted but on the other hand, the rules want us to shoot vertically (as a technical challenge). In our opinion, the restrictions for the kicker in Open League should be adjusted. Some alternatives would be:

We would be very glad if you would think about our proposals and would be happy for any feedback.

If we allow for more powerful kickers, how do we ensure that no one is going to get injured by the golf ball? For the technical challenge, safety measures can be put into place but those same measures may not be practical for competition play.

It would be great to see some calculations/tests on what would be the practical upper limit of a robot kicker with a golf ball and how much of a safety concern it would be if played with the current field setup.

Thanks for starting this thread - definitely something worth discussing!

I understand your Point @Mike , that without any power regulations Teams would build to powerful Kickers and i hope not, hurt themselves or other participates.

I hope the RCJ-Team will think about this, and hopefully change the rules.

I wasn’t on the TC when the technical challenge was written and don’t speak for the entire committee here. I think the point of having such a challenge is to encourage teams to test out what can be done with the golf ball in the hopes that a vertical kicker could be integrated into future seasons (see 9.3.2).

I agree that it would be difficult to integrate a vertical kicker into a legal 2022 robot and it would serve no use with the current rules. On the other hand, it is very difficult to verify significant rule changes like the vertical kick without the help of teams trying it out first. Perhaps we need to allow for some technical challenges to be completed on non-competitive robots/simple chassis if these challenges are to be included in next season’s rules.

We understand your points and the highest goal should still be a fair game with no injuries, but we could look at the Small Size League-Rules, because there are no restrictions for the kicker power and still no team has caused a change of this. No injuries in this league were caused by the robots, neither the kicker, although the referees are walking on and close to the field without a barricade during the game. We think that next year the kicker restriction should be changed as a test so that we all can see the impact of an useable vertical kicker.
Team Faabs

Well, I was there when this part of the rules was written – in fact, I am afraid I might have even written this particular version

@Mike is right though – the idea of making the vertical kicking part of the rules was to encourage teams to experiment with building robots that would be capable of doing that. We did not really expect any team to make use of it in games, the aim was mostly to see if it was even technically feasible, so that the rules could perhaps change accordingly in the future. As this discussion shows, we haven’t really managed to communicate that clearly which is something that we should be able to fix in the next version of the rules.

All in all, thanks for highlighting it!

we could look at the Small Size League-Rules, because there are no restrictions for the kicker power and still no team has caused a change of this. No injuries in this league were caused by the robots, neither the kicker, although the referees are walking on and close to the field without a barricade during the game.

Unfortunately, I do not think we can easily compare RCJ Soccer to Small Size League.

For one, the robots in Small Size League are remotely controlled from a single “server”, which makes it much easier for the referees to interact with the game – the robots normally do not move when the referee does something at the field, which is currently very different from RCJ Soccer.

Secondly, the field is being monitored by a high-precision camera at all times and so enforcement of rules is slightly simpler than in RCJ Soccer where this is left for humans to do (it does have its advantages though

). In this regard, I would like to point out that there actually is a limit on ball speed instead of kicking speed in Small Size League but doing something similar is currently unfeasable in RCJ Soccer.

A robot must not accelerate the ball faster than 6.5 meters per second in 3D space.
– Rules of the RoboCup Small Size League

Finally, the field is simply much larger in Small Size League and so vertical kicking is a little less problematic health-wise than in RCJ Soccer.

Still, I am convinced that after receiving feedback like this the rules will be altered so that things like vertical kicks are possible within the bounds of the rules, not just “for demonstration”, so that they can become part of the standard gameplay.

Hope this gave you a bit more background on the whole debate – if there is any specific point I might have missed, please do not hesitate to reach out!

Hi there,
I absolutely agree with TeamFaabs.
It is quite a challenge to build an 18cm robot anyway - which is good!
It is quite a challenge to see the small golf ball, so the robot must become less high to see
the golf ball when it is near the robot - which is also good!
Both leads to not only smaller and lighter but also to slower robots that need to have more tactics.
If you stick to the very slow 1m/s rule for the ball and want a strong chipper there is simply no space to build both into the much smaller “inner space” of the “first level” of robot.
So either teams can try to build one(!) stronger device or just skip the technical challange with a chipper. And if we have a chipping device build in, why not use it?
I do like the suggestions of TeamFaabs.
I also agree with Marek that no restrictions at all could be too much.
But face it: the walls around the field are set to 22cm by rule.
If we restrict the speed of the ball to never go higher than the walls we can use simple physics: 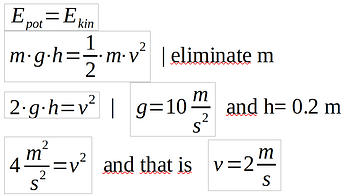 2 m/s is 4 times the power we are allowed to use now. That seems to bee inside the limits without the need of an “insane-mode”.
It also would ensure that the ball will not fly over the walls. That reduces the risk of injuries.

And than the technical challange…
as any athlete knows, the best way to throw a ball is with an angle of 45 degrees.

So even if we double the allowed max speed of the ball, we are still far to slow to chip as wanted in the technical challenge draft rules.

I cannot think of any team building a chipper powerful enough to do the technical challenge in this very restricted space.

So what about a „step in the new direction“ by doubling the allowed speed to 2 m/s measure with a new 20cm high ramp and a technical challenge to chip the ball from one of the neutral spots near the goal into the penalty area. This is at least 22cm distance. This can be done without exceeding the allowed maximum power (2m/s speed).

And than we should allow this chipping during normal gameplay, so there is no need to have two devices.

The only problem I see is that the robots itself must me prepared to get hit by a flying golf-ball that could hit the optical equipment that is necessary to see the ball.

After writing all this I could imagine another scenario.

We increase the speed of the kicker/chipper accelerated golf-ball to the 2 m/s, measured with a 20cm ramp.

And than we have the technical challenge to chip a ball trough a window.

If we have a kickoff point 10cm away from the window an have a window that starts at a hight of 2cm and ends a a high of 10cm we can assure that it is a real chipping without encouraging the teams to have a 45 degree angle an so we could restrict the chipping hight to lets say 8cm to protect the robots sensitive area.

This technical challenge chipping window is easy to build and a real innovation without producing to many other problems.

What do you think about it?